It has been very busy around here these past few weeks!  Our first priority has been our Cosmo boy.  A couple of weeks ago he had an MRI to try and determine what was going on with his back legs.  The MRI showed a slight bulge in a couple of his vertebrae, but nothing operable.  The findings suggest he may or may not improve, but at least for now he is fairly stable and has not gotten any worse.
The MRI also showed a couple of areas of concerns.  So we gave them the go ahead to do an ultrasound and that gave them further evidence of the bladder stones, but also a mass showed up in his adrenal gland.  Scary stuff!  They recommended surgery for the bladder stones and the removal of the adrenal gland.
I'm happy to say Cosmo came through a very difficult surgery with flying colors.  Purdue had him for almost a week, but he is home now and almost fully recovered.  He still has a wobbly behind, but doing well otherwise.  The MRI very likely saved his life as the pathology report on the adrenal tumor came back positive for cancer.  The good news is all the other organs seemed to be clear and they believe they found it early enough that it had not had a chance to spread.  His prognosis is good.....we just need to monitor him with blood work a couple times of year.

Next up was my step father....he needed surgery on his neck for a nerve issue causing him quite a bit of pain.  He came through the surgery fine and is home recovering.

I have certainly had my fill of medical procedures and hospitals!

Much more fun and happier things are on the horizon, such as the bridal shower my Mom and I are giving for my soon to be daughter-in-law in August!

Come September, we plan on heading up to Elkhart to have our shower repaired.  We have a crack in the shower pan.  Bill did a temporary fix so were aren't leaking water everywhere at least!  From Elkhart we will head up to Michigan, that is where the wedding will be held.  Have to say I'm ready to go....ready to be back on the road!

Posted by Debbie Goode at 8:45 AM No comments:

Happy Father's Day.......DaddyO!  I love this photo of you and Miss Shirley swinging!
Hope you have a fabulous day!  Love ya bunches! 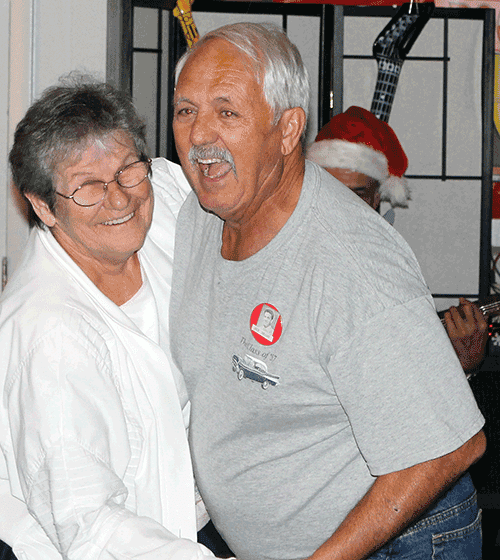 Posted by Debbie Goode at 10:44 AM No comments:

Mom and I had a great time in Michigan.  Relaxing and beautiful weather.  We checked out the hotel where the kids are getting married and did the little taste test thingy!  All very nice....I'm going for the prime rib!

After checking out the hotel, we said our goodbyes and headed up to Frankenmuth for a little shopping.  Did a lot of "shopping" but no buying...at least for me.  Still it was great to have that time with Mom!

Now that I'm back we have been dealing with the Cosmo boy.  Purdue wants to do an MRI and possibly surgery.  We were not ready to commit to that but after much research and speaking with another vet, we have decided do go through with the MRI.  There may or may not be any type of treatment to help Cosmo, but depending on the diagnosis treatment is vastly different.  We just need to know what we are dealing with....so I'm calling to set up the appointment Monday.  We both just decided that we couldn't live with ourselves if there was a solution for Cosmo and we didn't do all within our power to find it.  Purdue will put him under for the MRI and while he is still sleeping they will call us with the results.  If surgery is indicated, they can do it right then.
Posted by Debbie Goode at 1:56 PM No comments: