Had a very interesting day on Saturday.  I was doing some cleaning in the stick house and Bill was out mowing the yard.  He came in and said he needed my help with something.  Well, he had found a baby squirrel in the yard.  Seems it had fallen from it's nest in the tree.  I immediately called a local wildlife rescue organization.  They told me to place the baby into a shoebox with a towel for it to snuggle into and then place the box near the tree.  Then we wait.....from a distance.....to see if Mama Squirrel is coming back.  So, we waited, and waited, and waited some more.......about 2 hours worth.....and I'm sad to say no Mama Squirrel.  I did notice that there was at least one more squirrel in the nest above.....the wildlife refuge folks had hoped it would see the other squirrel in the box and go down to it.  Unfortunately, no such luck.  I again spoke with the wildlife refuge folks and they felt the babies were probably orphaned at this point.  They told me they would take the baby in and care for it.  I asked about the other one still in the nest and they didn't seem to have a plan.  I was not about to just let the other squirrel starved to death up in that tree....sooooo, I turned to my most wonderful husband......pushed out my bottom lip.....and begged him to save the other baby still in the nest.  My super hero husband borrowed a 16 foot extension ladder, but he still had to climb about another 4 feet up into the tree.  There he found not one more, but two more babies snuggled in the nest.  We reunited all the babies into the shoebox and my most wonderful, superhero husband headed off to meet with the wildlife refuge folks and deliver the babies. 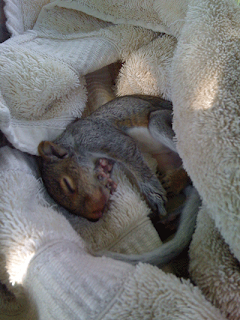 Now, it that too cute for words.  That little guy was so tired from his adventures outside the nest, that he immediately snuggle down and was fast asleep in no time! 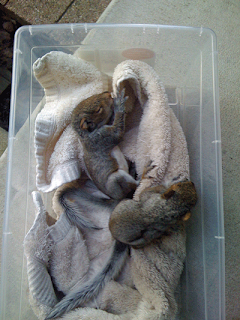 And here are the other two.....all the babies looked healthy and wiggled around so I know they have a good chance of growing up big and strong.  It was a very good day!
Posted by Debbie Goode at 5:37 PM