Been without internet, so got some catching up to do.....Let's start with the morning we were leaving "Big Red Barn" in MO. Around 7am, a terrible storm blew through the rv park. The tornado sirens were going and the wind was blowing hard. We pulled in the slides and hoped for the best. There was really nothing else to do--no other shelter near by and nothing but flat ground around us....so we decided, like everyone else, to just stay put and hope for the best. We were very lucky and came through unharmed. Unfortunately, the photo above shows that not everyone was as lucky. I did not get to personally speak to the occupants of that motorhome, but I was told no one was injured. Thank goodness for that! I think the whole storm lasted about 45 minutes and it did not take us long to hitch up the trailer and get moving down the road. We were careful to keep track of the storm, which was moving east in front of us. 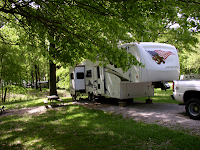 We were headed to Hazlet State Park in IL.
We did ok and arrived at the park about an hour behind the storm. I don't think it was as strong when it hit there---didn't see much if any damage, just a lot of standing water. That is a photo of our site. It is a very nice park, we only had electric at the site, but water was nearby. We ended up staying here two nights, before heading to Elkhart. More later.......